One of the first things you notice as you approach the Church is a string course which goes around the church just above head height. This indicates the extent of one major building campaign with one designer. It only misses out the porch and vestry, which are later additions.

Also of note are the windows, which comprise a fine set typical of the best of the Decorated period early in the 14th century. One must conclude that there was an architect even at such an early date. These windows have nicely moulded arches on the inside, which is an unexpected luxury. Among the flints in the walls there are fragments of limestone that could have come from an earlier building, and a few of them have a pink colour. Limestone will turn pink if subjected to supreme heat, so may we imagine an earlier Norman church on this site with a thatched roof which burnt down and resulted in a total rebuild?

The slate roof is continuous for both nave and chancel and was constructed in 1876 with scissor beams.

The tower is also 14th century Decorated period. It starts with a pair of angle buttresses on each outer corner, but these change to a single diagonal buttress above the first stage. There is a nice west window with clear glass. A special feature of this tower is the set of large stone circles containing quatrefoils for the silence chamber. Similar circular openings at Great Walsingham have been dated to 1320. Here two have been blocked with black knapped flints. The belfry has tall two-light Y-tracery openings and no parapet that are features of the Decorated period.

The 5 bells are in full working order. One of these is of special interest, because it was made by Thomas Darby in Norwich before he moved to King's Lynn in 1450: The Latin inscription around the rim means — "May the Almighty God bless us with his grace"; this is followed by the founder's trade mark. A stone plaque in the tower room expresses the excitement of restoring the bells in a new bell frame in 1894.

The east window was reconstructed in 1876. It has 5 lights and magnificent tracery designed by the architect, I.B.Pearce. He has used the
quatrefoil within circles motif from the, tower in his tracery design.

The indent of a missing brass from the SE buttress is interesting. From its outline one can guess that it was a medieval chalice brass with inscription for a priest; it may have been taken for scrap metal in the late 16th century when such emblems were little regarded.

The blocked windows have black knapped flints most skilfully cut and squared. This was a local technique, which developed in the 15th century. It required selected flints, which had been freshly quarried from out of the chalk. Ladbrooke's drawing (in 1820) shows a doorway into the south transept; this was not part of the original design and it threatened to cause damage to the. large window above it, so the wall had to be restored with flints again.

The eagle Lectern
Inside the church

Again the string course is found, matching that on the outside walls. The arches to the tower, chancel and transepts are all the same date,
namely early 14th century. The vertical emphasis is powerful.

The piscina and sedilia in the chancel express clearly the supreme confidence of that building campaign. The slim pillars are continued upwards into pinnacles which accentuate the vertical lines of this feature as well as the window above.

More piscinae:- the one in the north transept juts out like a shelf and has a pretty arch above with headstops. In the south transept there is a floor piscina with a four-petal drain in a square stone, and above is a separate piscina in the wall with elaborate ogee arch. This is as grand as the one in the chancel.

The south transept also has two large and sumptuous niches in the east wall. They were intended for images of saints; one is wider than the other, presumably to accommodate a pair of figures like St Mary and Gabriel. It is easy to imagine an altar, or two altars, set against this wall. The images were abolished at the Reformation.

The chancel screen is fine work of 1931 in memory of a churchwarden and his widow. The medieval screen was not quite so tall, judging by the slots cut in the stones of the chancel arch. A recess on the south side shows where the stairs to the medieval rood loft were sited.

The High Altar is clearly dated, 1624, and bears the name of the donor, Revd George Coppinge, who was Rector here for 54 years. The table was subsequently enlarged at each end.

The eagle lectern was given by the Vicar in 1896 as "a thank offering for many blessings", and with it came the special Bible. The eagle is a traditional emblem for St. John and is portrayed with wings unfurled ready to spring into the air and to Lake one's thoughts upward, high into heaven. 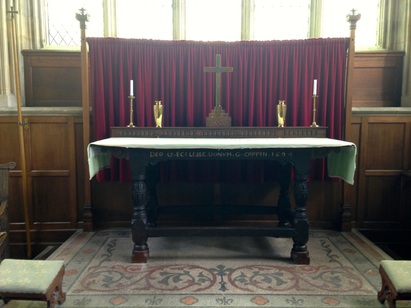 The High Altar
The Harbord ledger slabs in the centre of the church are particularly fine with deeply cut heraldry. Sir CharIes Harbord (d.1679) was Director General of the Crown Estates and Member of Parliament. He amassed a great fortune, but unlike Sir William Drury he was careful not to display it Lady Mary Harbord died at the time of the Great Fire of London. They lived in the parish of Drury Lane in London, and one of their offspring married into the Drury family of Besthorpe.

The font is 19th century, using a Norman period style. It is very large, shaped like a tub, because in Norman times Baptism was by immersion. The drain is inside the central stem and there are four shafts for support.

The transepts are a major feature of this church. At the time of their construction there were 4 manors in Besthorpe and the Prior of Wymondham Abbey was the Patron. Two guilds dedicated to the Annunciation of the Virgin Mary used in the north transept. Spelman suggests that the place name means "Best village" and so Besthorpe was derived "from the goodness of its soil". More recent scholars trace the origin of the place name to a Viking family Bosi. 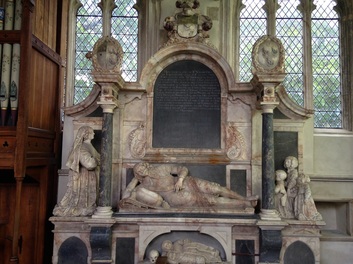 The Drury Monument
The tomb monument in the chancel is to Sir William Drury, who died in 1639. He reclines on a cushion and partly rolled-up mat with his widow, Lady Mary, kneeling at his head, She had the monument erected and we see 3 charming children kneeling at his feet. One child is carrying a skull as a symbol of its death. In a recess below there is another skull with a swaddled baby. The heraldry is displayed within two laurel wreaths. Note the cock for Lady Mary, because she was the daughter of William Cokaine, and 3 martlets with a crescent for Sir William. The crest at the top above a funerary helm is a greyhound's head. They lived at Besthorpe Hall. This alabaster work with marble surround was made by Gerard Christmas, who also made a fine monument for Elizabeth Drury in Hawstead Church (Suffolk). She died in 1610 after being boxed on the ears by her father.

The stained glass in the nave south window is by Heaton, Butler & Bayne and is dated 1880. It has two scenes of Christ, (1) Christ carrying His cross with the text- "Surely He has borne our griefs". And (2) "Come unto Me, all ye that are heavy laden". 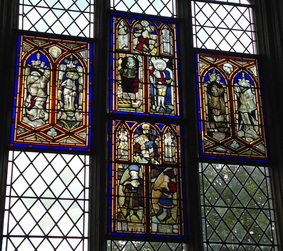 Medieval Glass in the South Trancept
The four evangelists have their emblems in large roundels of stained glass on the north side. St Matthew has the winged man, who is overlooking his writing. St Mark has the lion under his desk. Likewise St Luke's ox supports the books of the writer. and St John gazes towards heaven with the eagle which holds a purse in its beak. These emblems are taken from Revelation 4.7. The foliage design around each panel is typical of Norwich work in the mid-fifteenth century.

The medieval glass in the south transept is a rich collection of fragments with many details to study. In 1992 they were reset in ventilated bronze frames set against clear glass to form an isothermal glazing which will protect it and maintain an even temperature on both sides. The. first features to recognise are St Michael, the archangel, striking at the dragon with, Christ rising from the tomb and displaying his wounds (both in left panel) and and a bishop with St George thrusting a spear into the mouth of a dragon (both in the right panel), In the centre are fragments from seasonal scenes of the labours of the months, notably the slaying of an ox with an axe. Top centre has St John with possibly another St George, and lower centre there are musicians with cittems. They stand on a floor pattern which is distinctive of Norwich glass painters in the 15th century.
This information was originally compiled for Church Tours in 2000 by Richard Butler-Stoney. It has been edited for this website.
Powered by